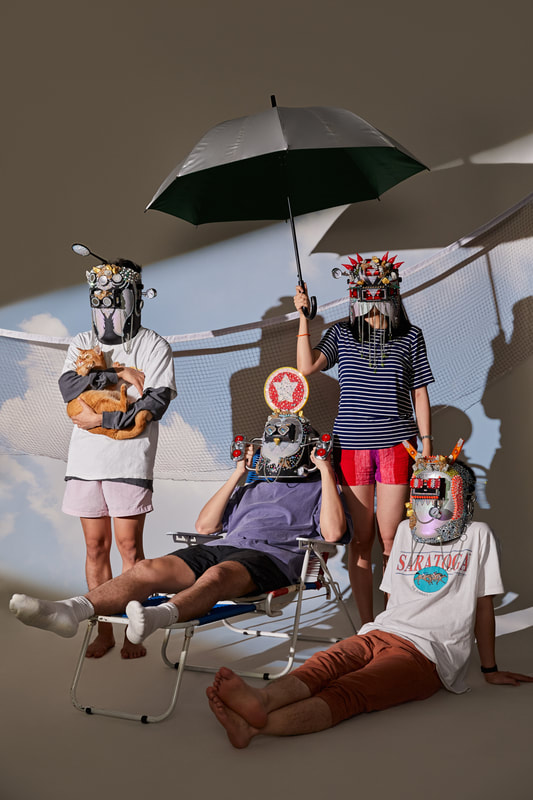 pigeon (people like us) is a recent exploration by Khairullah Rahim which looks into tactics of appearance(s) and demeanour, specifically in considering the relationship between objects, bodies and community, and its affects on safety as a branching point. The title of this series presents itself as a metaphor responding to the frequent mass extermination of pigeons that takes place in broad daylight. These operations were reportedly led by licensed specialist pest control contractors with approval from relevant authorities and has sparked numerous debates and concerns questioning the ethics behind the method employed to tackle this matter. There is an uncanny parallel between the pigeons and marginalised folks, whose bodies are constantly navigating and code switching in between guilt, shame and desire under surveillance in a hostile environment.

The suite of headgears were created with a welding mask as its base foundation; a safety object which primarily functions to protect the user’s eyes, face and neck from flash burn, ultraviolet light, sparks, infrared light, and heated objects. These headgears were sourced from the vicinity of a working class neighbourhood in Singapore, Boon Lay, and were later manipulated to appear desirable, fabulous, flamboyant and sparkly especially in the shade. This was a deliberation in response to the neighbourhood estate where a large fraction of the residents consist predominantly of the blue-collar working class demographic which includes the ageing population, migrant workers and foreign students. The neighbourhood is also notably infamous for reporting high(er) numbers in organised crime activities as highlighted by the local press. While many associate light closely with notions of safety, there are also lights which illuminate more intensely on some than others. Under close scrutiny, other elements on the headgears reveal themselves to be objects that enable safety and protection, eg. road reflectors, blindspot mirrors, handrails etc. Here, the artist is particularly drawn to how light and hyper-visibility may also be subverted back into strategies for disadvantaged communities by functioning to repel and shield as they become diversionary tactics instead of disclosing and giving away (outing someone). The stark and even glaring appearances of these headgears also brings much more attention to its garishness and beauty while simultaneously masking its risks by acting as a diversion, becoming a decoy.